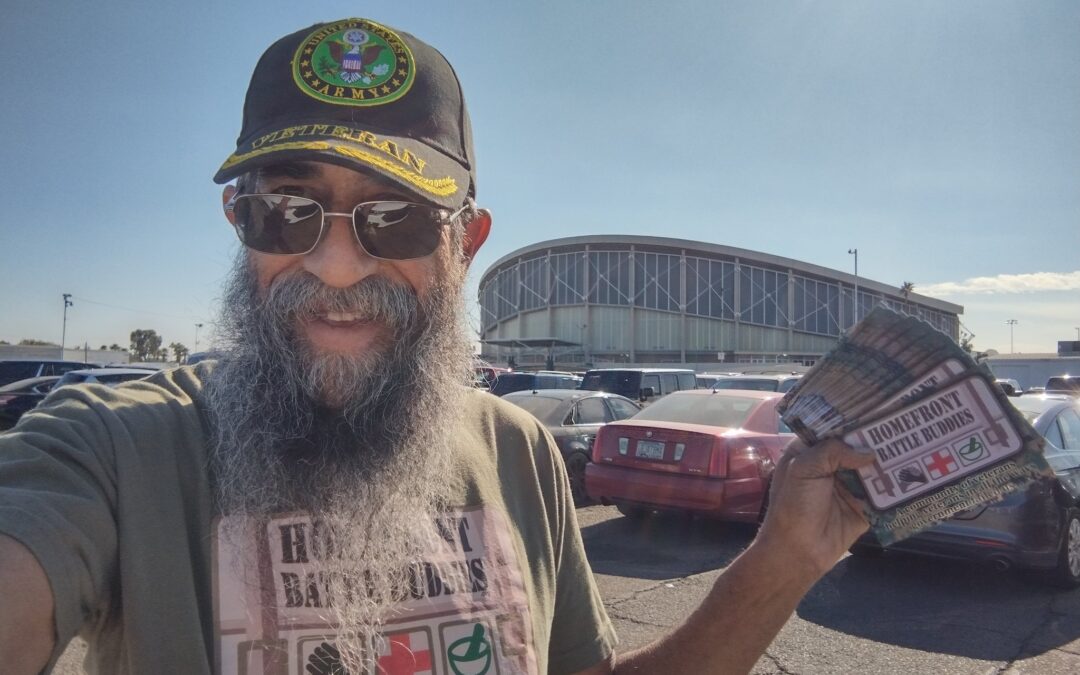 I spent the day at the gun show yesterday and ‘Society’ never ceases to amaze me.
The December show at the Arizona Veterans Memorial Coliseum is the largest in the country, and every year thousands of firearm enthusiasts from around the world come to the fairgrounds for the event of the year.  Being a veteran and a gun owner goes hand in hand, and I knew there would be a ‘target-rich environment’ for an Activist to promote a worthy cause.  I was right.
Upon arrival I started with the age-old vehicle flyering.  I had picked up five hundred flyers at the printers that morning and spent a good little while working my way towards the entrance.  By the time I had gotten there I made a pretty good dent in my stack, but then the fun started.  I have a lot of experience built up not only from  years of going to the shows as a consumer, but I have set up and worked tables there as a vendor and doing Political work for Congressman Ron Paul (eight years), and also for the OathKeepers. I know the massive layout of the show and started on the East building.
Working with people is truly a delicate art form.  You can’t just approach anyone and start a conversation on your subject at this particular show because that is an intrusive interruption to a person that is there for a purpose of their own and a specific agenda.  I won’t say it was a madhouse, but this was a more than well-attended event that was energized by two factors that was quite evident to me by the time I was done; prices had come down some from the steep gouging I saw at the last few shows I’ve attended, and availability was WAY up.  I’m glad I only brought a couple hundred dollars with me or I definitely would have spent considerably more!
I knew I had my work cut out for me because I had ‘tested the waters’ on the way in.  As I put our information on cars people were arriving, getting out, and walking towards the entrance.  I was able to hand out and speak with quite a few people and got a really good response from those who responded positively.  What disturbed me was the attitude of the negative responders.  I have handed out materials in many cities across the nation (including Washington D. C. – the absolute worst for trying to right wrongs) and been turned down thousands of times.  This was so different.  In telling someone “I’m working with a 501C3 non-profit trying to stop Veteran Suicide” and have someone put their palm up at me and tell me “I don’t want to hear it!” with a nasty attitude is disheartening and maddening at the same time.  I must admit twice I did lose some composure and informed them that maybe that attitude was WHY so many were taking their own lives.  It literally brings me to tears as I write this.
Knowing the mass of people I am confronted with and a good feel for the prevailing attitude, I systematically weaved my way back and forth the rows adding to my usual gunshow want list anyone who had veteran or military insignia, apparel, or gear – plus those who looked like they might be ex-military.  We can tell each other pretty easy.  The beauty of what I was doing in search of vets who need help is that those who I asked who weren’t vets were still open to what I offered, and took my literature for display on their table.
There were a few more solid contacts I made there in that some veterans I spoke with were more than willing to take extra cards to their respective Veterans Administration offices and local VFW/American Legion posts.  It was tough carrying on any kind of lengthy conversations because of the massive amount of traffic and commerce, but all in all I can say I covered pretty much all three main halls, the outside booths, and everyone in the Yellow Display hall.  What little literature I had left I put on cars on the way back out and felt good about all I had gotten accomplished.